Notes Towards an Autobiography of an Island

There are no seasons, only a shift in humidity which divides the year into two vaguely felt phases—Season “A” and Season “B”; the wetter and dryer, colder and warmer, windier and stiller seasons. The plants follow cues which seem to have nothing to do with humidity or length of day or sun spots or anything. There is no dying season. People are always out in their yards with machetes and chain saws, cutting back the encroaching jungle.

Where the yard ends and the jungle begins is where the undergrowth becomes the overgrowth. In the forests, plants can be found that grow twenty times larger than the species’ blueprint would allow. Seeds carried by birds from Australia and dropped into isolated mountain pockets germinate, reproduce themselves, and develop into strange new species. There are many colonies of unique plants that seem to have discovered new variations on old themes. The results are sometimes practical, sometimes flamboyant. 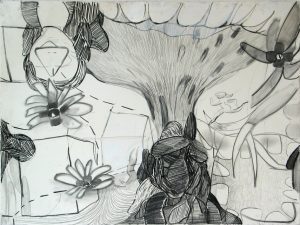 For example, there is the yellow lobelia plant, which looks like one of Dr. Seuss’ Lorax trees. The entire population of this species is found only along a few windswept yards of cliff overlooking the windward side of the island. The flowers are very simple yellow trumpet-shaped forms, which cluster beneath a crown of dark leaves. The long, flexible stem is well adapted to negotiate the harsh winds that constantly gust up from the lowlands.

In the adjacent valley grows the self-evolved, self-peeling banana plant, itself particular to this one pocket of mountain. This unique species produces bananas at the rate of about one every three years. It then peels itself over the month-long stretch of its fruition. The self-peeling banana doesn’t seem to display any adaptive advantage over its predecessors except that is saves some work for the various birds that come to feed on the fruit.

Nothing is endemic. Foreign plants gain a toehold in the forest and advance like troops over the mountainside. They can be seen from a distance – a patch of shiny yellowish foliage running like a leak through a grove of dusty silver-green native trees. The exotic species, by virtue of the adverse conditions once suffered and adapted to in the place of origin, have developed deep tap roots. As soon as the seed germinates, the root goes down to rock, pushing harder than gravity. Meanwhile the roots of the native plants fan out delicately across the top six inches of soil, where the water is warmest.

There is some kind of blooming season, Waves of different colours will wash across a mountainside as if following some orchestration, but the cues remain mysterious. There is the moment of the African Tulip, (deep orange blotches) followed by the Silver Oak, (pale orange) Royal Palm, (dusty sprays of pollen) Jacaranda, (lavender) and Shower (golden, coral, yellow white.) Sometimes a particular species of blooming tree will dominate a hillside for several years, then almost imperceptibly fade out of sight. The remaining members of the colony continue to exist in reduced form, not flowering, not really growing, not really reproducing. They stay around like ghosts, containers of a remembered form, perhaps holding a few feeble seeds as reminders of their former fecundity. 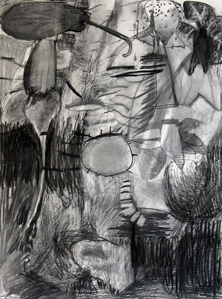 Every native plant has a name and a medicinal, culinary or ritualistic significance. The introduced plants haven’t quite worked their way into the mythology, yet. People are still trying to see if the leaves of, say, the climbing heliconia, lend themselves best to basket weaving or poultices, or whether these plants will find their own niche by virtue of the beautiful flapping noise the leaves make in the wind at night.

Attempts by the National Park Service to prevent introduced plants from taking over the native habitat can have results that are both futile and stunning. The Faya tree, introduced from Portugal, thrives on the crumbling rock of new lava flows. In an attempt to eradicate the trees, pieces of surgical tubing were fitted over cut branch stumps, then a strong poison was poured into the tubing. As the trees died, the leaves broke the into flaming color. From a distance the trees looked like burning torches, and in their last days they sent out bright red berries, which fell to the ground and seeded themselves a hundred-fold.