Princess Victoria Ka'iulani's brief life was part of a significant chapter of Hawaii's and ultimately the world's history. Born in 1875 in Hawaii to a Scottish father and Hawaiian mother, Ka'iulani's life straddled two hemispheres and cultures. As a teenager, she was sent to  England to be educated in preparation for her role as the future Queen of the Hawaiian kingdom. Several years ago I discovered that she had been living 'under the radar' in my adopted home of Brighton & Hove, England from 1892 - 97.

In 1893, while living in Hove, the Hawaiian kingdom was overthrown -- Queen Liliuokalani, her aunt, was deposed by a group of insurgents whose ultimate goal was the annexation of the islands to the United States.

Following this event, due to the unstable situation at home, Ka'iulani remained in Hove for several years, during which time she made a trip to the USA to speak on behalf of her people, meet with President Cleveland, and denounce the illegal coup. She returned to Hawaii but died within two years, at the age of twenty-three.

.......
Hawaii was annexed by the USA in 1898, became a territory in 1946, and the 50th state in 1959. The historical context surrounding Ka'iulani's life ultimately links her public role to the history of the United States and the wider world in the 20th century. Pearl Harbor, near Honolulu, became a strategic naval base for the USA and the target of the Japanese attack in 1941, which was a defining event of World War II, marking the entry of the US into the conflict. (See 'Crystal City')

Ka'iulani, through her image and the tragic story associated with her short life, lives on as an iconic presence within the collective memory of Hawaii. In photographs and popular imagination, her image evokes a fairy tale princess, or tragic heroine who moved between two different cultures and identities. In the context of history, she was a compelling and charismatic figure whose life story became entangled with a wider political drama, and around whom, in retrospect, a significant chapter of world history seemed to pivot.

Imagery connected to this theme

'A Princess in Hove' a blog about Jane Couldrey's film 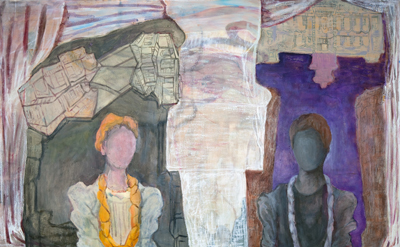 About the imagery in 'Ilima Pikake'