‘Magic Island’ is actually a man-made peninsula in the middle of the Pacific Ocean. Here, many paths cross --  sun-battered homeless people sleep under a large baobab tree, while an extended family enjoys a smoky barbeque on the sand. A tall man balances on one leg and waves his arms like the goddess Kali, offering seed-filled palms to swooping birds. At the water’s edge, a newlywed couple from Japan, in fairy tale white, poses for a photographer, and in the distance, a surfer paddles over an octopus as the afternoon sun dazzles her eyes. Each person floats within their own bubble; tiny worlds overlap and intermingle for an extended moment…and then gently burst. 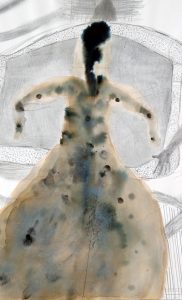