THE POOL AT CRYSTAL CITY

Crystal City was the name of an internment camp in Texas which held over 4,000 people of Japanese, German and Italian ancestry who had been branded as alien enemies in the aftermath of the Japanese bombing of Pearl Harbor. The historical setting in which Crystal City came into existence encompasses a period of encroaching cultural and military influence in the Pacific from both East and West, and subsequent events book ended on either side by the attack on Pearl Harbor in 1941 and the atomic bombings of Hiroshima and Nagasaki in 1945.

I am intrigued by the irony and dissonance between the fairy tale sounding name of the camp and the bleak reality of the internees' circumstances. I choose to play with the images of a reflective pool, a deep reservoir and a precious, multi-faceted crystal as I re-imagine the stories connected to this place which has now vanished into the desert dust.

My grandfather, Motokazu Mori and his second wife, Ishiko, were medical doctors living in Hawaii when Pearl Harbor was attacked, and the following day they were arrested by the Honolulu police. It turns out that the FBI had been tapping their phone, and when Ishiko, who was also a Hawaii correspondent for a Tokyo newspaper, took a call from the Yomiuri Shimbun, a brief conversation that mentioned trees in bloom became erroneously convoluted into evidence of treason. Here is the transcript of The Report of the Investigation of the Pearl Harbor Attack, in which this phone call is mentioned.

Separated from the rest of their family, Motokazu and Ishiko lived at Crystal City from 1942 - 1945. During this time, my father, then a teenager, remained in Honolulu, dropping out of high school in order to support his younger siblings and elderly parents by driving a pineapple truck and city bus.

At the camp, Motokazu and Ishiko worked as doctors in the infirmary and also started a tanka poetry club. Tanka is a five line, thirty one syllable poem. A number of the internees wrote poems, letters and kept journals on tiny scraps of paper that were smuggled past the censors and out of the camp. The 'Texas-shisha' poems were published in various newsletters and anthologies at Crystal City, in Hawaii and Japan. 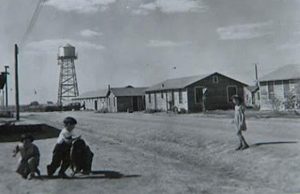 The camp was part of a secret prisoner exchange programme, and some of the occupants were swapped for American prisoners of war in Germany, Japan and Italy at the end of WWII. Japanese families who had migrated to Peru were also sent to this camp and used as pawns in the prisoner exchange.

When reading Jan Jarboe Russell's 2015 book, 'The Train to Crystal City' I came across a brief, but particularly moving anecdote recounting the sad story of two young internees, Japanese girls from Peru who, on a hot August afternoon, drowned while wading in the large circular pool where internees gathered to escape the heat. While futile attempts to resuscitate the girls were underway, the Japanese women of the camp were summoned to bring pots of freshly cooked rice to the scene, in the belief that this would save the girls' lives. The girls' bodies were blanketed in layers of warm sticky rice, but they could not be revived.

Although it mercilessly took these two young lives, the pool had served as both a reservoir for irrigating fruit trees and a place for the internees to gather and find refreshment and respite from their dislocated, land-locked state. I find myself returning to the metaphor of the pool/reservoir as a means of reconciling tragedy and transcendence; a watery lens, mirror and repository of memory and imagination.

The themes below describe ideas and narratives within my artwork that connect with the story of Crystal City in personal, historical and metaphorical ways: