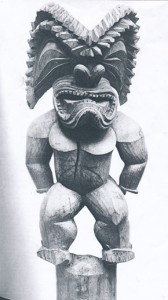 The face of Kū carries a strong psychological presence within my work, anchoring a wider narrative within the image of a human-like form.

As an archetype, he moves through time and space, and within my personal mythology he connects a series of historical events in the Pacific spanning several centuries to contemporary and universal themes of aggression and conflict. Today Kū 's image has been appropriated by popular culture, his powerful and aggressive posture morphing into the ubiquitous 'tiki' souvenir, a mass produced commodity on par with the ubiquitous garden gnome. From sacred to profane, his image persists in the form of a dualistic and enigmatic figure.

The images to the left are in the collections
of the British Museum (top) and
Brighton Museum (bottom) in the UK.